The Lungs of the Planet are Smoking

In 1516, Sir Thomas More published his classic Utopia, in which sheep devoured people as land devoted to subsistence livelihood was enclosed for pasture land. We face a contemporary dystopia in the Amazon rainforest as fires expanding cattle ranching destroy a precious ecosystem and violates the human rights of indigenous peoples:

“We did not ask if he had seen any monsters, for monsters have ceased to be news. There is never any shortage of horrible creatures who prey on human beings, snatch away their food, or devour whole populations; but examples of wise social planning are not so easy to find.”

My last post reflected my outrage at the assault on the Brazilian Amazon, as  President Bolsonaro encouraged open conflagration in defiance of those who would protect the Amazon as a treasured ecosystem. An international outcry quickly ensued.

Here, I reflect on the overall situation, preparing remarks for a panel  at Ramapo College on the open burning of the Brazilian Amazon just as climate protests erupt around the world. See my working notes, shared in Google Drive.

My role: explain aspects of the political ecology background.  The event, a sort of teach-in, features my hero, Dr. Eric Weiner, who has worked for decades with native people on ecological restoration with carefully calibrated economic benefits — exactly the way it should be done. Aim at improving livelihood, not pursuing economic growth per se. From Sky News: 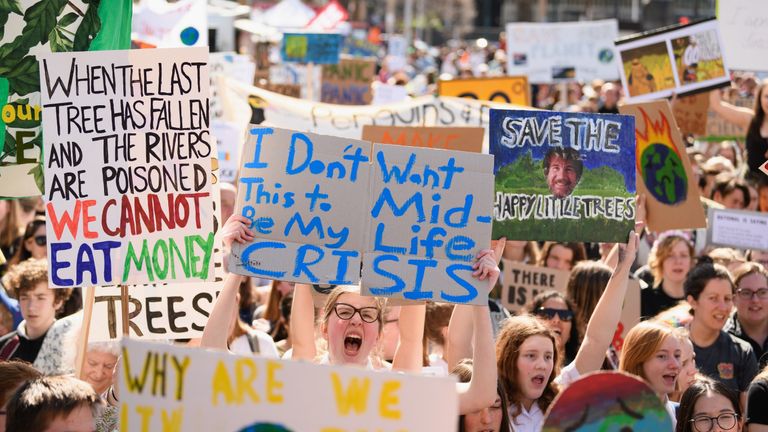 In case you missed it, 2018 was the 4th hottest year since the 1880s, following 2016, 2015, 2017. See State of the Climate, 2018 (Bulletin of the American Meteorological Society, September 2019). Let’s not quibble but continue the spunk of Greta Thunberg and the youth whose future is on the line. That is why we are here, at this event and on this page.

Meanwhile, at the U.N., Greta speaks truth to power as the delegations from the USA, China, Russia, and others fail to hear. Greta gets it right, but, as I see it, she is way too optimistic. The flagrant Bolsonaro assault on the Amazon provides a vivid case study of the collision of economic growth and the future of the planet .

The forces that propel climate catastrophe will overwhelm the burgeoning resistance, as I have been saying consistently for over 12 years now: See my 2007 Statement of Concern and 2013 review of positive trends, my utopian speculation, and a visionary website.

China has become a significant investor in infrastructure and industrial expansion in Brazil, thus backing Bolsonaro’s development initiatives and turning against soy farmers in the American Midwest:

Boycotting US soybeans by turning to Brazil’s bumper harvest seems like an ace in the hole for Beijing, since soybeans alone account for 10 per cent of total US exports to China. Moreover, destabilising US agricultural exports could turn the traditionally conservative and soy-dependent American Midwest against the Republican Party in November’s midterm elections.

China is actively expanding its economic footprint in Latin America, undermining the historic role of the USA. I vividly recall as a visitor to New Orleans gazing at the convoys of freighters carrying grain bound for China down the Mississippi, but those days may be over:

In addition to gaining more access to soybeans and other natural resources, China will be flexing its economic power in a country that traditionally has been under U.S. commercial influence. But that influence has been waning in recent years, as has the relationship between the U.S. and China, which remain locked in a months-long trade war that has limited the amount of U.S. soybeans being sold to China. If the trade war between the two superpowers rages on — perhaps even if it doesn’t — China will be looking increasingly to South America, and Brazil in particular, to satisfy its immense demand for soybeans as well as other agricultural products.

Bolsonaro’s term is just starting, but his approval rating has already sunk to 23% after winning 55% in his recent election. As reactionary regimes run roughshod over the future, the time to stand up has come.

Rainforests: From Sink to Source

Tropical forests now emit more carbon than they are able to absorb from the atmosphere as a result of the dual effects of deforestation and land degradation, a new study says (my emphasis and link).

Now read the article from The Intercept that reveals Operation Amazon,  Bolsonaro’s militaristic strategy to colonize the Amazon rainforest into a money-making commodity. See Vox article as well. Business Insider examines the infrastructure within Operation Amazon, including the extension of BR-163 and a hydroelectric dam. See historical background paper. View maps and videos of the fires. Mongabay provides data and analysis: 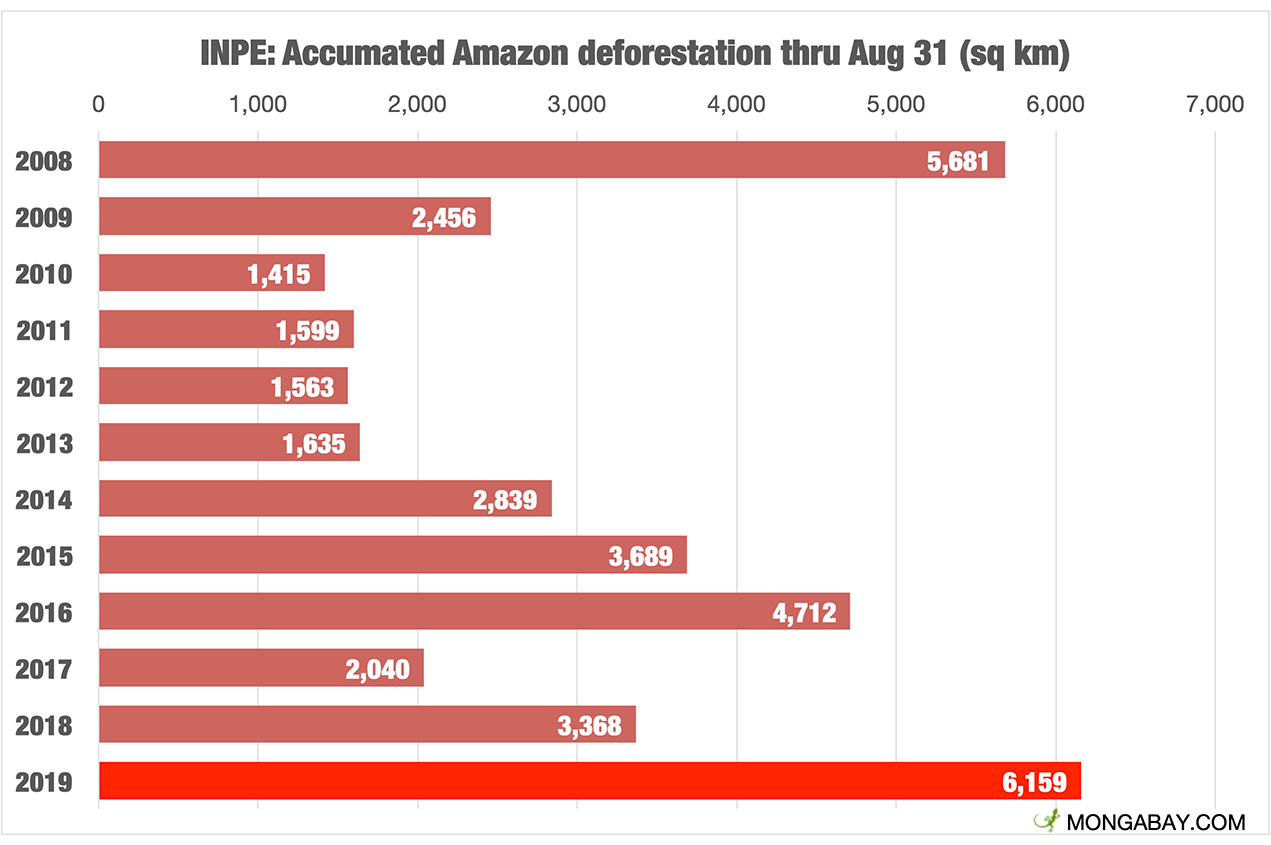 Economic pressure against deforestation is building: Principles for Responsible Investment, a group of 230 investors with $16.2 trillion in assets has threatened hundreds of companies “to either meet their commodities supply chain deforestation commitments or risk economic consequences.”

The EU and the South American common market (Mercosur) is on the verge of a historic trade deal that will solidify Brazil’s export market. However, Austria and others threaten to veto the agreement due to the Bolsonaro fires in the Amazon.

Advocates have cited BlackRock, the world’s largest investment firm, as the major source of capital that destroys the Amazon rainforest:

The Amazon Fund provides external financing for projects to prevent such abuses as open burning and violation of human rights in the Amazon. Already, Norway and Germany have threatened to withdraw contributions in response to Operation Amazon and Bolsonaro’s attacks on the Amazon.

Follow the fine example of Gabon in the African Congo Basin in its Results-Based Payment Partnership:

The 10-year [$150 million] agreement will reward Gabon – in the form of results-based payments – for reducing greenhouse gas emissions from deforestation and degradation. The agreement will also reward them for the absorption of carbon dioxide by natural forests. It will retroactively honor performance from as far back as 2016. Monies from those and future results will be paid out annually.

Brazil’s cattle population is around 232 million and Brazil is the world’s largest exporter of beef. Follow the supply chain. Yale School of Forestry offers an article on cattle ranching in the Amazon:

Cattle ranching is the largest driver of deforestation in every Amazon country, accounting for 80% of current deforestation rates. Amazon Brazil is home to approximately 200 million head of cattle, and is the largest exporter in the world, supplying about one quarter of the global market. Low input cost and easy transportation in rural areas make ranching an attractive economic activity in the forest frontier; low yields and cheap land encourage expansion and deforestation. Approximately 450,000 square kilometers of deforested Amazon in Brazil are now in cattle pasture. Cattle ranching and soy cultivation are often linked as soy replaces cattle pasture, pushing farmers farther into the Amazon.

The Natural Resource Defense Council provides extensive coverage of the encroachment into the Amazon, concluding with an appeal to consumers to boycott beef from Brazil.
Cattle ranching at one steer per hectare encroaches far more than soy: 80% to 10%. Further, as three billion consumers move up the food chain and more beef/person is consumed, the soaring demand for beef could mean an annual withdrawal of rain forest triple the size of New Jersey per year through 2030, as I extrapolate using data from Brown.
Brazil also exports chicken and pork, making Brazil a major source of protein for the growing global middle class consumer. Examine the list of countries that import beef, poultry, and pork from Brazil. See also data on global meat production.
The conversion of rainforest to industrial agriculture could explode. See U.N. Food and Agriculture Organization for report on global meat production and consumption. The rainforest assault reveals the cost to the planet of meat consumption. Adopt a plant-based diet.

Soya cropland lies southeast of the Amazon in the Cerrado savanna, but the expansion of soy farming by large corporations like Cargill, displaces cattle ranching, driving the ranches north into the Amazon. Cargill has been criticized for the corporation’s forest encroachment.

Chinese soybean purchasing shift from USA to Brazil was initially as dramatic as advertised. China has recently returned to USA soybean market, with prices depressed. Trace the supply chain for soybean. The US Department of Agriculture has recently issued a report on the soybean trade war.
Long term could involve a major shift in supply to China: One of the five prongs of China’s Belt and Road infrastructure initiative connects China to Kazakhstan for import of soybean to China, escaping all this trade disruption — a typical national response when trade in agriculture staples is interrupted. Starvation is bad for authoritarian regimes (except perhaps North Korea).
China also is actively exploring for niobium (current price: over $42K/metric ton) in northern Brazilian Amazon.  According to the Wall Street Journal, China will help fund road extension to colonize a remote area occupied by Munduruku and by Yanomami people:

Chinese leaders and the country’s state-owned enterprises have, for years, been trying to lock up vital natural resources around the globe, according to Margaret Myers, director of the China and Latin America program of the Washington-based think tank Inter-American Dialogue.